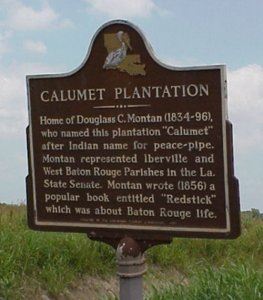 Home of Douglas C. Montan (1834 through 1896), who named this plantation “Calumet” after Indian name for peace-pipe. Montan represented Iberville and West Baton Rouge Parishes in the Louisiana State Senate. Montan wrote (1856) a popular book entitled Redstick which was about Baton Rouge life.

Calumet Plantation was named for the traditional Indian peace pipe. The plantation began with the purchase of a tract of land on June 7, 1875, by Douglas Cullum Montan and his sister, Mrs. William P. (Mary Lelia) Harper. The house is next to Allendale Plantation. Montan (1834 through 1896) represented Iberville and West Baton Rouge parishes in the Louisiana Senate and wrote a fictional account of life in Baton Rouge entitled Redstick (Scenes in the South), which was published in 1856.