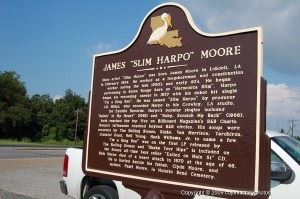 Blues artist Slim Harpo was born James Moore in Lobdell, LA in February 1924. He worked as a longshoreman and construction worker during the late 1930s and early 1940s. He began performing in Baton Rouge bars as Harmonica Slim Harpo began his recording career in 1957 with his debut hit single I’m a King Bee. He was named Slim Harpo by producer J.D. Miller, who recorded Harpo in his Crowley, LA studio for Excello Records. Harpo’s popular singles included Rainin’ In My Heart (1961), and Baby Scratch My Back (1966), both reached the top five on Billboard Magazines R&B Charts. Harpo’s influences reached beyond R&B circles. His songs were recorded by The Rolling Stones, Kinks, Van Morrison, Yardbirds, Grateful Dead, Neil Young, Hank Williams Jr. to name a few. “I’m a King Bee” was on the first Long Playing (LP) released by The Rolling Stones and Shake Your Hips is included on the Stones all-time best seller Exiled on Main St CD. Slim Harpo died of a heart attack in 1970 at the age of 46. He is buried beside his father, Clyde Moore, and mother, Pearl Moore, in Mulatto Bend Cemetery.