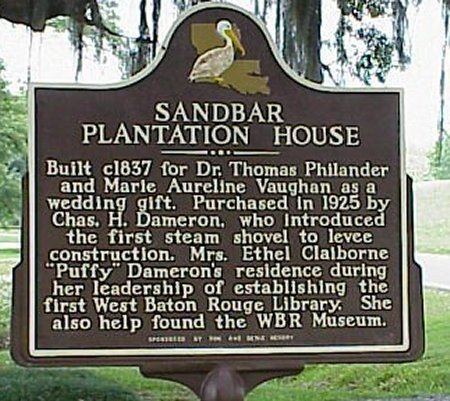 No official dedication ceremony was held for the marker. The marker was erected after Sandbar Plantation was placed on the National Register of Historic Places to mark the completion of the project goal by the current home owners (November 1999) 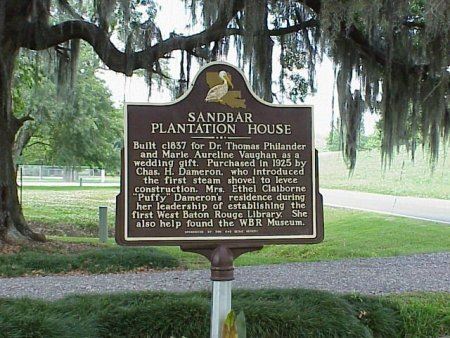 Built in 1837 for Dr. Thomas Philander and Marie Aureline Vaughan as a wedding gift. Purchased in 1925 by Chas. H. Dameron, who introduced the first steam shovel to levee construction. Mrs. Ethel Claiborne “Puffy” Dameron residence during her leadership of establishing the first West Baton Rouge Library. She also help found the WBR Museum.

Sandbar Plantation House is located between the town of Brusly and the Gulf Intra-coastal Waterway on River Road. It was named after the Sandbar, an area between Cinclare and Beaulieu Plantations on the Mississippi River where a sandbar appeared when the Mighty Mississippi waters receded.

Sandbar Plantation House was placed on the National Register of Historic Places on September 2, 1999. Its area of significance was education and it contains many different architectural styles: Greek Revival, Colonial Revival and Craftsman/Bungalow. For many years it was known as the “Dameron House” due to its many residents who have played a significant part in the development of the parish. 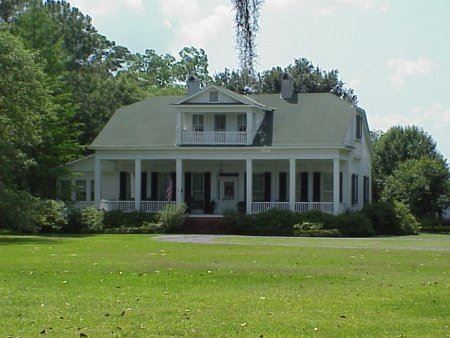